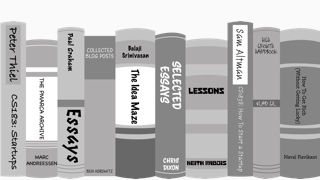 I often get introduced to people looking to make the jump into startups and Silicon Valley. This is the reading list I send them. It’s not meant to be comprehensive. Rather, it’s meant to be a primer for many of the popular concepts and jargon you will hear working at a startup. If you have suggestions for additions, feel free to send me a message.

Peter Thiel’s 2012 class on startups at Stanford. The notes were taken by a student, Blake Masters, and later turned into a book. My favorite lecture is “Class 9: If You Build It, Will They Come?”.

An archive of Marc Andreessen’s now defunct blog. My favorite post is titled “The only thing that matters”.

All of Paul Graham’s essays. My favorites are “Do Things That Don’t Scale” and “How To Make Wealth”. Paul also has a good book called “Hackers and Painters” (originally an essay).

Like Marc Andreessen, Ben’s original blog no longer exists. Fortunately, his original blog posts were turned into an e-book. My favorite post is “Lead Bullets”. The content was also adapted into a general management book.

From one the lectures of Balaji Srinivasan’s Stanford 2015 course/MOOC CS184: Startup Engineering.

My favorite post is “Come for the tool, stay for the network”.

Written down by Delian Asparouhov. My favorite is “How to Interview an Executive”.

Videos from CS183B: How to Start a Startup

A lot of the content was written by Elad Gil on his blog. My favorite section is the interview with Stripe COO Claire Hughes Johnson.

How to Get Rich (without getting lucky)

Naval Ravikant’s tweetstorm on wealth creation. Not startup advice per se, but many of the concepts are useful for building a career in Silicon Valley.

The Holloway Guide to Equity Compensation

An in-depth resource on startup equity. If you are an early employee at a startup, be sure to learn about 83b elections and QSBS eligibility!

Nearly 200 weekly posts from Fred Wilson on the basics of business. My favorite post is “Turning Your Team”.

Ben Thompson’s framework for thinking about internet-based businesses. However, my favorite post is about Apple and hard-to-model sustaining value of well-designed consumer products: “What Clayton Christensen Got Wrong”.

Sequoia Capital’s guide to writing a startup business plan (which is useful for creating a pitch deck). Recommended for any founder pitching their startup.